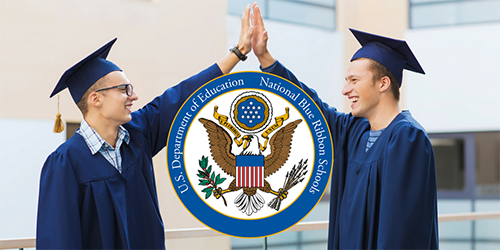 Congratulations to the 329 schools nationwide that have been recognized as “Blue Ribbon Schools” by the U. S Department of Education.

The recognition was announced recently by U.S. Secretary of Education John B. King. This is one of the most prestigious awards that can be bestowed upon a school and one that is coveted by schools districts and communities across the country. The National Blue Ribbon Schools Program has recognized over 7,500 schools since its inception in 1982.

The purpose of the program is to recognize both public and private elementary, middle and high schools for academic excellence and closing the achievement gap among various sub-groups within the school.Schools are nominated by the Chief State School Officer (CSSO) and must use their state accountability and assessment systems to identify schools that should be considered for this award. Schools are recognized as either an “Exemplary High Performing School” or an “Exemplary Achievement Gap Closing School”. A school that qualifies in either of these categories is considered a “National Blue Ribbon School”.

Achieving this honor places schools in the spotlight as examples of excellence for others to follow. In an era of standards, state report cards, rating systems and school comparisons, it is refreshing to recognize excellence that should be studied and emulated rather than identifying weakness and placing blame. It is most appropriate to recognize such schools so that others can not only celebrate with them, but also reflect, study and replicate the positive approaches used by the award winners that make sense for their schools. We should spend more time identifying excellence happening across the country and encouraging other schools to learn from these best practices. We learn from one another and education is no exception.

What a National Blue Ribbon of Distinction Truly Means