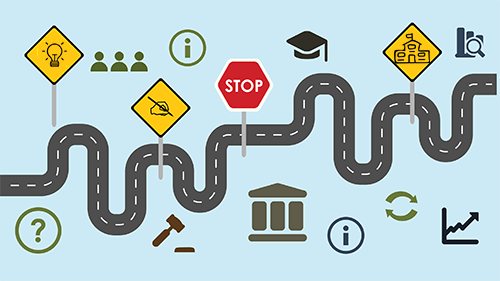 Since the passage of the Every Student Succeeds Act (ESSA) in December of 2016, the Ohio Department of Education (ODE) has been busy preparing Ohio’s draft plan which must be submitted to and approved by the U.S. Department of Education. The draft plan must adhere to all state requirements outlined in ESSA and will serve as a blueprint for Ohio to address standards, assessments, accountability and special help for struggling schools. The ODE has sought stakeholder input over the past year through a host of meetings held throughout the state, a series of webinars covering each of the major topics and the opportunity for individuals to weigh in via electronic resources. Below is an outline of some of the major provisions in Ohio’s ESSA draft plan.

Each state was required to consider a number of topics that represented changes from No Child Left Behind (NCLB) to ESSA. These considerations incorporated the elements of NCLB that remain and concomitantly incorporate the changes produced by the passage of ESSA. Highlights of the considerations include:

State Assessments
A consideration of keeping the current state assessment schedule, adjusting it or creating an entirely new system.
OHIO’S PLAN: Ohio will essentially stay with the same testing schedule currently in place. This means that assessments in ELA and math will take place every year in grades three through eight. In addition, science and social studies tests will be administered two times each in this grade band. At the high school level, Ohio will continue with the End of Course (EOC) exams for eight different subject areas. Throughout the year long input phase, ODE representatives heard loudly and clearly from stakeholders that the continual change in state testing had to stop. For example, Ohio used three different test companies over the past three years to administer state exams. Preparing for different test formats, types of questions ,length of tests and the number of tests are just a few of the factors that people said cannot keep changing from year to year. Moreover, many educators indicated this the “moving target” syndrome needs to stop. As a result, leadership at ODE has decided to maintain the status quo for state assessments.
State Long Term Goals
State’s were charged with determining a long range goals over a specific time period to reach identified proficiency levels in mathematics, science, ELA, performance index, graduation rates, and chronic absenteeism.
OHIO’S PLAN: Ohio has chosen a ten year long timeline to reach proficiency goals for the state. The proposed state level goals include:

This component of Ohio’s draft plan addresses Annual Measurable Objectives (AMO) which include ELA, mathematics and graduation rate plus additional proficiency targets. Ohio’s latest AMO targets are considerably lower due in part, to the adoption of different and more rigorous state assessments as well as increases in proficiency passing scores.

Sub-Group Size
Identifying an “N-Size” for reportable sub-groups of students specifically to address gap closing. Ohio has been using an “N-Size” of thirty (30) since the inception of NCLB.

OHIO’S PLAN: “Gap Closing” refers to eliminating the academic performance of nine student subgroups as they compare to the tenth subgroup which is referred to as “All Students”. Subgroups that are currently “reportable”as an accountability measure on the state report card must have at least thirty student members. The thirty student threshold was established based on insuring that “identifiable student data” would not be released to the public via the media, state report card releases or pubic records requests. This number was also powerful because it represented a group size that had some degree of statistical significance. However, the ODE has argued that  the thirty student threshold for subgroup reporting leaves out a significant number of students. The ODE webinar regarding N-Size in fact, began with a question asking the audience how many students should be”excluded” when it comes to state reporting. Aside form an obvious “Zero” response from the audience, the webinar went on to show what percentage of specific subgroups were being excluded due to the thirty student threshold. As a result, the ODE has determined that “identifiable student data” and statistical significance of subgroup size take a lower priority than the ability to report publicly on the largest number of students practicable. Ohio’s plan is to reduce the N-Size from thirty to fifteen.

Measure of Schools Quality
Identification of at least one non-academic measure of “School Quality” that will be incorporated into the state accountability system.

OHIO’S PLAN: During ODE’s conversations with stakeholders across the state there were numerous proposals on various ways to meet this ESSA requirement. The non-academic measure of school quality was supposed to have a high likelihood of enhancing academic achievement in the future. Ohio has chosen to use two non-academic measures of school quality which are chronic absenteeism and student discipline incidents. These two indicators of school quality will appear on the state report ard and be disaggregated by subgroup. These two choices align quite nicely with recently enacted Ohio House Bill 410 which creates a new process for students who are chronically truant and prevents school districts from suspending students from school solely on the basis of truancy. Ohio has established a statewide goal of reducing chronic truancy to less than 5% by 2027. In addition, the ODE has pledged to investigate the use of school climate surveys as a possible third non-academic measure in the future.

Review and make necessary revisions to the state report card in light of the requirements of ESSA as well as state determined accountability measures.

OHIO’S PLAN: Ohio will continue with the “A-F” state report card for districts and buildings. As planned, the fall  release of the state report cards will have a summative A-F rating for all school districts and all school buildings for the first time in the fall of 2017. Consequently, one school district will be labeled as an “A District” and another will be a “B District,” and so on. The same will apply to each school building. The Performance Index, Growth Measure, Graduation Rate, Gap Closing, K-3 Literacy and Prepared for Success will all remain and will be graded on an A-F scale.

Title One Funding
Determine how Title 1 funds can be better utilized to assist struggling schools.

OHIO’S PLAN: Ohio will take the ESSA requirement of setting aside 7% of Title One funds for school improvement and distribute that money through a competitive process. Schools will apply to receive support and associated funding from a yet-to-be-determined menu of improvement sources.

Additional components of the Ohio Plan Include:

Ohio’s plan will be submitted for the U.S. Department of Education’s approval this spring. Any adjustments or changes must be completed and ready for implementation at the beginning of the 2017-18 school year.